Choose the Expertise to be included in the shortlist profile:

LMAA and CIArb London Branch Joint Webinar - Rights of Appeal in Arbitration
Quadcast Shipping Special: “Deal or no deal?” – contracting “on subjects” in the light of The Leonidas
Roundtable: The pathology of arbitration proceedings – what longer-term effects and solutions will this crisis yield?
Read more events 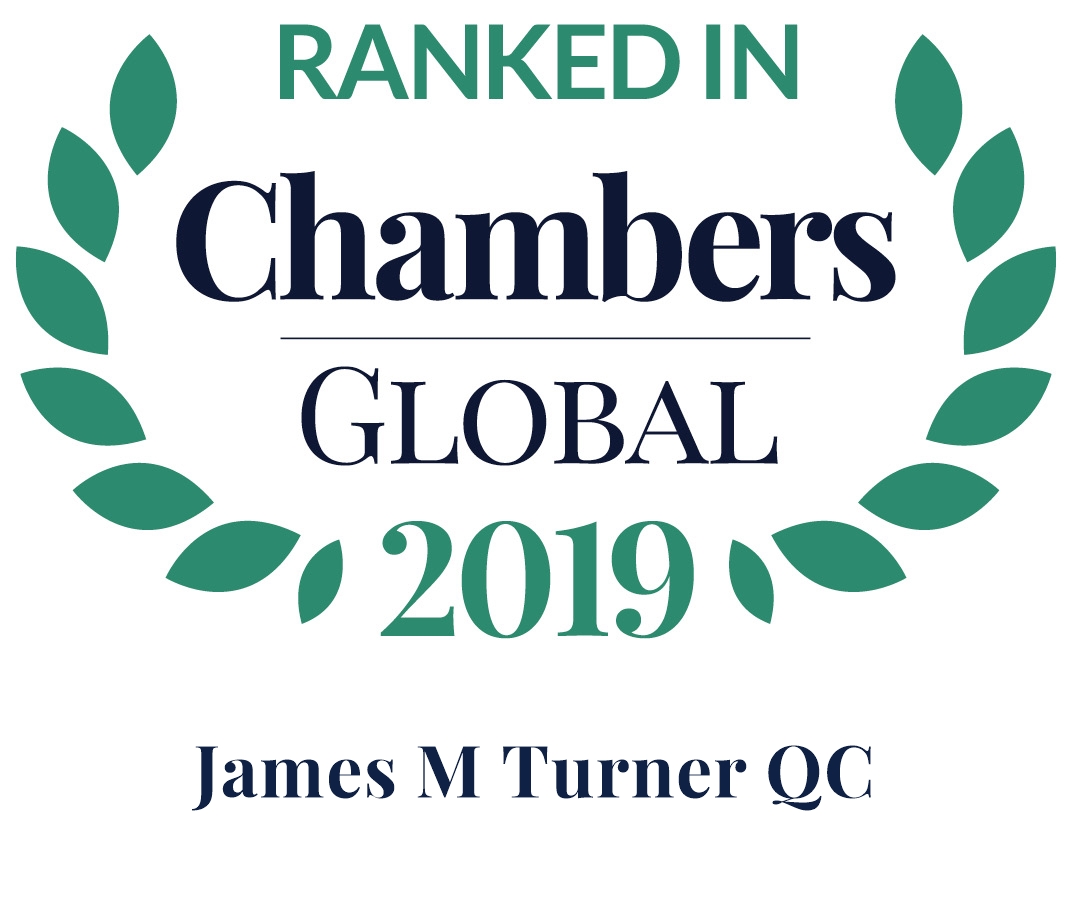 Publications
Co-author with Justice Dr. Sarah Derrington of The Law and Practice of Admiralty Matters, OUP 2007, 2nd edition 2016. The first edition was described by Prof. D.R. Thomas (2007) 13 JIML 304 as “a ... very fine book ... comprehensive ... and skilfully structured ... which provides the reader with a clear and readable exposition of a fascinating area of law and practice. It is well researched, comprehensive, contemporary and discerning ... a significant contribution to the literature ... ”.
Co-author with Jenny Salmon of HFW of "The Lender on the Hook?", an article published in the February 2013 edition of Maritime Risk International on the ship finance implications of the decision in The Kyla [2013] 1 Lloyd's Rep. 565.
Cited as speaker in "Aktuelle Entwicklungen im Wirtschaftsrecht", Tielmann, in the February 2013 edition of Neue Zeitschrift fur Gesellschaftsrecht.
Author of the Review of Berlingieri on Arrest of Ships, Informa 6th edn., 2017, as published at (2017) 23 JIML 310
Author of “The Renos - a Trojan Horse in the LOF citadel?” as published in Lloyd's Shipping & Trade Law Journal, (2018) Volume 18 Issue 7.
Co-author with Joseph England of “Shipbuilding contracts and the prevention principle after Cyden Homes”, published in Lloyd's Shipping & Trade Law Journal, (2019) Volume 19, Issue 1.
Author of the Review of Tettenborn & Rose on Admiralty Claims, Sweet & Maxwell, 2020, as published at (2020) 26 JIML 375.
Appointments
CEDR-Accredited Mediator
Member of the Chartered Institute of Linguists
Shanghai International Arbitration Centre panel
AIAC (formerly KLRCA) panel as mediator and arbitrator
Memberships
COMBAR, TECBAR, LCLCBA, British-German Jurists, Chartered Institute of Linguists.
Languages
Dutch and German (both fluent); French (working knowledge). Member of the Chartered Institute of Linguists.
Personal
Married, 4 children
Interests
Photography, cycling and wine

"A skilled tactician who can be entrusted with anything" (Chambers UK), as an advocate – with “a deservedly excellent reputation” (Chambers UK) – he appears most often in arbitration, before tribunals operating under LCIA, ICC, HKIAC or LMAA Rules, as well as in ad hoc matters. His Court work is almost exclusively in the Commercial and Admiralty Courts and on appeals up to and including the Supreme Court.

Well-known for his “astute grasp of commercial realities” (Chambers UK) and ability “to crunch through the details of a very technical case” (Legal 500), much of James’s work requires the co-ordination of a range of expert specialisms, ideally suited to his down to earth approach and team-building skills that make him “extremely easy to work with” (Legal 500 Asia Pacific). Reflecting the invariably international character of his practice, James has extensive experience in dealing with foreign law and multi-jurisdictional disputes. He has a particular eye for appreciating and addressing cultural barriers in international arbitration.

James has given written expert evidence of English law in the Courts of New York, Italy, France, Germany, Spain, the Netherlands, Ireland, Belgium and Austria.

James has considerable experience of applications for injunctive relief (freezers, delivery up, restraining orders and anti-suit injunctions), as well as receivership and interpleader.

James has a First Class Master's Degree in German Law and speaks and reads German and Dutch fluently. He accepts instructions and appointments in either language. He also reads French.

James accepts appointments as arbitrator in a range of international commercial disputes. His experience as arbitrator stretches back nearly 20 years and includes ad hoc, LMAA, ICC and LCIA references. He is on the arbitration and mediation panels of the Shanghai and the Asian (formerly Kuala Lumpur) International Arbitration Centres.

James qualified as a CEDR-Accredited mediator in 2001 and has extensive experience of mediation, both as mediator and as counsel.

What the directories say
Shipbuilding

“A true expert in shipbuilding contract disputes” (Chambers UK) and “a popular choice for offshore vessel construction cases” (Legal 500 Asia Pacific), James has well over 20 years’ experience in shipbuilding and ship-conversion disputes, gained through many dozens of instructions. Many of those have gone to full hearings or preliminary issues.

Often instructed at the first sign of trouble in the Buyer/Builder relationship, he provides real-time guidance to protect the client's position - under both the shipbuilding contract and related contracts such as refund and performance guarantees, loan agreements and charterparties - and to start to build the evidence to fight the case.

He is instructed by both owners and shipyards and has experience of contracts to build bulk carriers, MPVs, tankers (crude, product, LNG and chemical), barges (dumb, oil-carrying, pipe-laying and crane), tugs, superyachts, cruise ships, Rhine navigation vessels, ro-ro ferries, container carriers, gas carriers, MODUs, work-over units, jack-ups, heavy-lift vessels, FPSOs and even submarines and an LPD - as well as ancillary contracts such as sub-contracts for propulsion equipment and refund and performance guarantees.

Shipbuilding disputes are almost exclusively referred to arbitration and James has appeared in arbitrations governed by most of the well-known arbitration rules (including LMAA, LCIA, ICC and HKIAC) and has taken several cases to mediation. He has on numerous occasions sought, obtained and successfully resisted permission to appeal under s. 69 Arbitration Act 1996.

As a junior, James gave written expert evidence of English law in ancillary proceedings in the Italian Courts, and subsequently appeared at first instance and (with Simon Rainey QC) on appeal in the English Courts in Ravennavi SpA v New Century Shipbuilding Co Ltd [2006] 2 Lloyd's Rep. 280, [2007] 2 Lloyd's Rep. 24 CA. The dispute concerned the proper construction of an option agreement for the construction of up to two crude and product oil tankers. The case is now cited in Lewison on the Interpretation of Contracts in support of propositions advanced in James’s evidence in the Italian proceedings.

James has been acting in offshore construction and energy-related disputes since the mid-1990s. At Chambers’ 2018 Energy Seminar, he spoke about decommissioning disputes. His experience includes:

James is frequently instructed in charterparty, bill of lading and sale of goods and ship-sale disputes of all hues, involving cargo damage, unseaworthiness, maintenance, due diligence, ISM, off-hire, withdrawal, safe port, bunker contamination, purchase options, demurrage and detention, cancellation, faulty repair, title, risk, rejection (and so on) - and the many and varied issues which arise in connection with them. He also speaks regularly on ship recycling.

He is particularly adept at difficult issues of contractual construction; technical disputes requiring an ability to master engineering and scientific expert evidence; and cases requiring a good knowledge and understanding of ships and seamanship.

The co-author of Derrington & Turner on Admiralty Matters (see "Publications"), James is a highly experienced Admiralty practitioner, often cited in the Directories for his prowess in wet work. He is frequently instructed in and has wide experience of:

Salvage: usually LOF, but also private / ASG references and in the Admiralty Court (as long ago as The Yolaine [1995] 2 Lloyd’s Rep. 7, and as recently as The Kuzma Minin [2020] 2 Lloyd’s Rep. 617). He acted for owners in a very substantial SCOPIC claim, in which the counterclaim was for loss of a nearly-new capesize bulk carrier. He also acted in a case complicated by the EU sanctions then in force against Iran.

From October 2014 to February 2015, he appeared in a substantial trial in Hong Kong arising out of a ferry disaster off Lamma Island on 1 October 2012.

Wreck removal, as in The "Green Opal" [2003] 1 Lloyd's Rep. 523. In 2015, James appeared in arbitration in a dispute arising under two WRECKHIRE contracts, following a major fire on an FSO. More recently he was instructed to advise the main contractor in a dispute with its co-venturer in a wreck removal in Angola, and a sub-contractor in the very well-known removal of the wreck of the COSTA CONCORDIA. In 2020, he advised in a nascent dispute under a WRECKFIXED contract.

Limitation. Often instructed on substantial matters raising important points of principle on limitation, James appeared in Gard Marine & Energy Ltd v China National Chartering Co Ltd ("The Ocean Victory") [2017] 1 Lloyd's Rep. 521 Sup Ct, which finally laid to rest the long-running debate as to whether Charterers can limit for damage to the chartered vessel. In 2007, James appeared in the Supreme Court and Court of Appeal of Gibraltar in Zelikov v Merlin, arguing that the Court of Appeal's decision in The Western Regent [2005] 2 Lloyd's Rep. 359 (that limitation can be invoked in the absence of liability proceedings) was wrong.

Arbitration is the chosen forum in most matters on which James acts or advises. Many of those disputes come before LMAA panels, but James also has considerable experience of other arbitral settings, including the ICC, LCIA and HKIAC. He has frequently been instructed and appeared in cases for arbitration in other jurisdictions, such as Rotterdam, Singapore and Hong Kong.

He has appeared in several applications to dismiss claims for want of prosecution under s41(3) of the 1996 Act, on both sides of the argument (most recently in 2017). His experience in such applications (in Court and arbitration) goes back to the late 1990s and includes two cases in the Court of Appeal.

He is regularly instructed in relation to challenges to Tribunals and their Awards. Examples include:

James is regularly instructed in a broad range of other substantial commercial disputes. Illustrative cases include:

James has a solid track record in banking and finance disputes, with particular emphasis on financial instruments - letters of credit, bills of exchange, promissory notes and guarantees - as well as trade and asset (particularly ship) finance disputes and contracts for differences.

James is frequently involved in and advises on disputes involving refund guarantees and performance bonds given in connection with shipbuilding contracts.  He has appeared in a number of reported cases and has given expert evidence of English law in foreign proceedings. Illustrative cases include:

James was accredited as a mediator by CEDR in 2001, achieving “registered” status the following year (which required a certain minimum number of mediations and CPD points). Since accreditation he has accumulated considerable experience of mediations, as mediator, assistant mediator and counsel.

As mediator, James brings to bear an individual blend of analytical skill, tenacity, humour and respect – without shrinking when appropriate to challenge – and an ability to think creatively, commercially and “outside the box” of the particular dispute.

He is particularly adept at analysing the value of the dispute to the parties, and the risks involved in pursuing it.

The mediations in which James has taken part have featured disputes involving banking, CMR, commercial contracts, commercial fraud, financial services, international sale of goods, professional negligence, and shipbuilding. More than half of these disputes settled at or as a result of the mediation.