Simon Kverndal QC
Called: 1982
Silk: 2002
"Simon is a very experienced silk; he pays attention to details and gives pragmatic advice."
(Chambers UK, 2020)
"He is an extremely affable, capable and persuasive advocate who has a loyal following among solicitors."
(Chambers UK, 2020)
"His advocacy is notably impressive."
(Legal 500, 2020)
"He's able to understand a dispute in a very short period of time and crystallise the legal and factual issues in a very clear and succinct manner."
(Chambers UK, 2020)
"Excellent at communicating and discussing cases with his solicitors."
(Legal 500 Asia Pacific, 2020)
Download PDF
View vCard
Email Simon Kverndal QC
Add to shortlist

Choose the Expertise to be included in the shortlist profile: 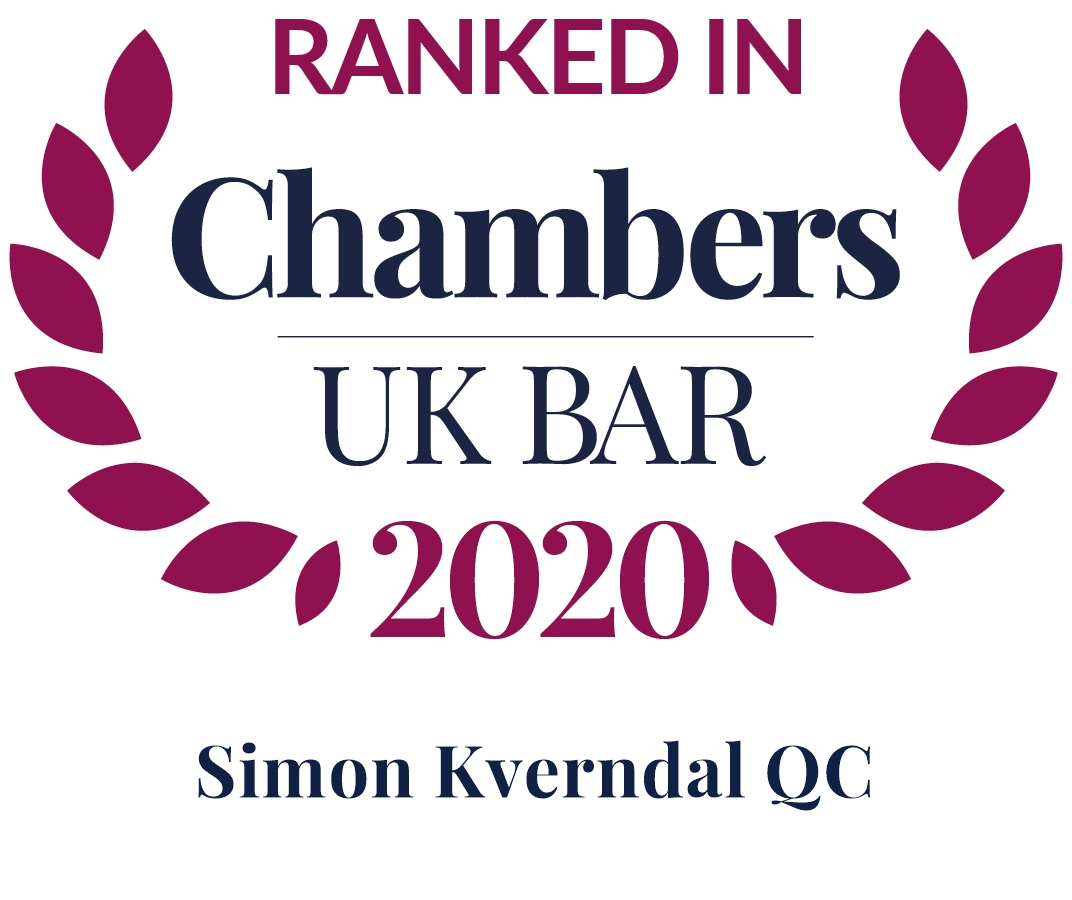 Simon Kverndal QC specialises in all aspects of maritime litigation and arbitration. He is particularly well-known for his experience and expertise in maritime commercial arbitrations (particularly LMAA) and maritime casualty cases. Consistently ranked by the leading legal directories, with Chambers UK noting that "he is top flight in arbitration matters”. While his work typically involves detailed consideration of the many and varied technical issues which arise in the field of maritime transport, he is further praised for "his ability to identify key issues and hurdles and give clear guidance on how to overcome them."

Simon is frequently instructed to advise and appear as counsel in shipbuilding and shipsale disputes and on related refund guarantee issues.  He is a leading specialist in marine casualty claims, under charterparties (unsafe port, fire, cargo damage), LOF salvage and collision actions. Recently he has been particularly involved in offshore disputes, particularly the hire or sale or construction of rigs, support vessels and supply vessels.  Though shipping is his main area of practice he was heavily involved in 2013/2014 defending a leading Russian businessman facing committal for contempt of court.

Simon is an accredited mediator and member of ADR chambers. In November 2006 he joined the panel of Lloyds (LOF) salvage arbitrators (re-appointed 2009 and 2014); and is also frequently appointed as arbitrator in charterparty and shipbuilding/shiprepair cases.

What the directories say
Shipping

Simon Kverndal is one of the leading advocates in London maritime arbitration and has argued all types of charterparty cases and appeared in many commodities arbitrations. In the eight or so years following the collapse of the shipping markets in 2008 he argued many arbitrations involving early termination of time charters and COAs, giving rise to interesting and various damages issues; in the same period he appeared in a wide variety of shipbuilding disputes.  In 2015/2016 the focus shifted offshore and he has been heavily involved advising and appearing in arbitration cases involving the hire, sale or construction of rigs, support vessels and supply vessels (having for many years lectured for BIMCO on the Supplytime charter).  Recent examples include:

Other leading cases include -

As one of the panel of LOF arbitrators, Simon is one of the leaders in the salvage field and as counsel in major salvage cases; he also has a wealth of experience in collision actions in the High Court and has been involved in recent years in a number of Wreck Removal cases.  Examples in the last 2-3 years include:

International Arbitration is Simon’s core area of practice as counsel, particularly in LMAA charterparty arbitrations but also LCIA and ICC.

He has been heavily involved recently advising and appearing in arbitration cases on the offshore side involving in particular contract termination, sale or construction of rigs, support vessels and supply vessels (Simon is an expert on Supplytime 2005, having lectured on this charter for many years for BIMCO).

As arbitrator Simon has been on the LOF salvage arbitrator panel since 2006 (c.100 appointments) and he is also regularly appointed as arbitrator in shipping and offshore disputes, often as sole (in particular under Wreckhire, Wreckfix, Wreckstage and private submissions).  In February 2020 he is due to sit as party appointed arbitrator in a 4 day SIAC case in Singapore.

Recent illustrative cases as arbitrator include:

Other recent cases (in addition to several LOF awards) include:

• A week long hearing in June 2015 as sole under Wreckhire leading to awards totalling some US$17m.

Simon has wide experience in shipbuilding disputes, having acted for both yards and buyers; since 2009 he has been particularly active in this field and with related refund guarantee issues.

Simon Kverndal has a growing following amongst maritime solicitors as a favourite choice to mediate shipping disputes.  He brings to his role as mediator a range of skills and qualities which go well beyond those which have made him a successful shipping and commercial QC.  He combines an unusual degree of commercial acumen and astuteness with a kind and charming personality and his style, though firm and forthright, is relaxed and friendly.

Simon is a well-regarded and experienced (some 40 appointments) alternative to the usual mediators and has a high success rate.